I’ve had another busy year, with some very exciting projects, but the website is becoming quite difficult to keep up to date with all the current exciting work I am doing. At some point I will have to rebuild it, but for now I just thought I’d write a quick post to let you all know one of the best places you can keep up to date with the work we are doing and current projects and reproduction galleries; our social media.

You can find links to our Facebook, Instagram, and Twitter on the left, but I would particularly direct you to Instagram to see the various stuff we have been involved in, and to Facebook for a gallery of curated projects here, particularly the museum and Universities handling collections in this album.

We are currently working on a large reproduction handling collection for the AHRC-funded ‘Bringing Vikings back to the East Midlands’ project by the Centre for the Study of the Viking Age at the University of Nottingham. This will be completed in the next month, and accompany a large viking exhibition in the Museum of Archaeology at Nottingham Lakeside arts  a series of handling and practical craft workshops.

From the 27th June to the 2nd of July, I was privileged to be invited to attend the Viking World Conference 2016, hosted by the Centre for the Study of the Viking-age, at the University of Nottingham.

As part of my invitation as well as being a full delegate at the plenary conference, I also would be manning a stall before and after lectures, and also during the breaks and lunch hour. This would contain both reproductions of original objects I had made, as well as a small display on some of the experimental and investigative work I had done into craft techniques, and objects use and function.

I have found previously that there is often a reluctance from professionals and academia to engage with a display such as this, particularly as until they spoke to me, most did not know I was also a professional within the field, however, whilst there was still a little of this, my overwhelming impression was that of interest, enthusiasm, and support, from the cast majority of delegates, often from places I was not expecting it.

This is particularly the case from the conferences two organisers; Professor Judith Jesch and Associate Professor Christina Lee, who not only put in an amazing amount of effort to organise and run the conference, but also showed a lot of personal support and interest in the unusual work I do. Both brilliant scholars, and lovely people. 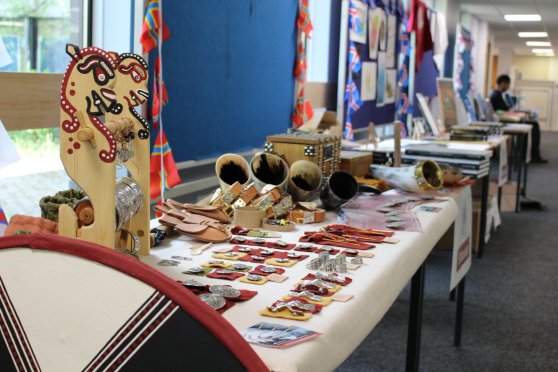 The programme for the conference was very varied and wide-ranging, with speakers from all over the viking world, from the Americas to Azerbaijan. There are far too many topics to recount here, but you can see from the programme, just how much was covered.

Things that stood out for me particularly were a talk by Charlotta Lindblom from Vejle Museum on the evolving story of the monumental landscape at Jelling; the sheer scale of the monuments was astounding to me. There were also a number of talks dealing with the local level networks of outland management by Andreas Hennius, who put forward the evidence for outland exploitation in the Viking-age, particularly tar pits, but which also got me thinking about other related industries, such as charcoal manufacture, honey and beeswax collection/farming, amongst many others. This notion of a complex and layered landscape exploitation tradition as part of a symbiotic relationship with larger towns and trading centres, made a lot of sense to me, and is a much neglected area of study. Ryan Fosters talk about Shieling naming in Northern Britain,brought out through the use of naming variations, a similar suggestion of a variation in activities and identities.

In addition different talks by Vusala Afandiyeva, Þórir Hraundal, and Charlotte Hedenstierna-Jonson, really brought home the huge influence and activities of the Rus, both down the Rivers of Eastern Europe and modern-day Russia, and in around the Caspian Sea, and a compelling case for a more robust trade route to Asia. It is an aspect of Viking studies I had always been aware of but the scale and significance of it, I think, has really begun to emerge (like the Jelling monument) as far greater than previously appreciated.

A subject very close to home was the talk from Eleanor Rye (from the University of Nottingham) who discussed placename construction in Cumbria and the Wirral, which owe a lot to West Norse influence, which reinforced my observations within my own field of interest; material culture, which I feel shows similar patterns.

Kerstin Näverskölds talk on Shields as objects and symbols, and Leszek Gardeƚas discussion of pendants and amulaic objects in Poland, as symbols of belief and identity, brought home the nuance between a physical and functional object, and its personal significance and symbolism, and also a cautionary tale of how our beliefs and desire can taint identification and understanding of an object.

I shall have to stop here, completely unfairly, because the temptation is to just run down the list of many outstanding papers given, some of personal pet subjects too, and this blog post would never end. Needless to say, it was an outstanding collection of work and material presented, and enough to overstimulated my brain even now, a week later!
All in all, the conference, perhaps accented for me by the few talks I mentioned, brought home the scale and influence of the viking world, the significance and sophistication of its infrastructures and networks, and social systems, and the vast array of cultural variation and complexity of identities and belief structures. Diversity and Change indeed.

Tommorow myself and my wife will be heading off to Nottingham to attend the Midlands Viking Symposium on Saturday which I have been tweeting about for a while now! We have been asked to attend with some of the reproduction objects we have made to show during the breaks and talk to the attendees about how they were made. It should be a good event, and we look forward to hearing the lectures and chatting to folks about the work we do!

Here are a few pictures of some of the new things I’ve been working on and will have for sale at the event! 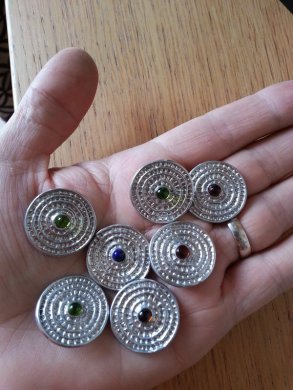 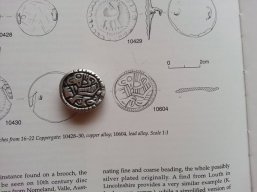 2015 was a busy year for me. I got to meet some interesting people and was asked to undertake some interesting commissions throughout the year, the first of which came from the University of Nottingham’s CSVA (Centre for Study of the Viking Age) with an enquiry about some objects for their ‘Vikings for Schools‘ programme. As with most of the commissions I get, I spent some time with them, working out what sort of things they may need, and what they would need them for. As they are working with school children they needed to be very safe, and as robust as possible for frequent handling. In addition, there was a little working out of what sort of things might be useful, or possible, and working out a budget.

In the end we came up with a list of Viking-age objects that I produced and delivered to the University Campus. Quite a lot of the creative and construction process I shared on my Twitter account: @eblueaxe and can still be seen there if you look back at my feed and images. Below are the finished objects; including ice skates, a reproduction of the Lincoln runic comb and case, and the Scar viking boat burial comb, a knife with a wooden carved handle (based on a handle fragment from York), and a ‘carved’ leather scabbard. There was also a blowing horn and strap, four arm-rings based on finds from the Cuerdale and Silverdale hoards, and an early-eleventh century axe with an Ashwood haft and brass punched collar inspired by an example from the River Thames. 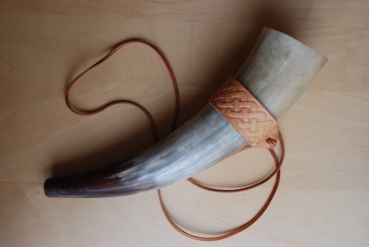 Here is a picture of it all together, also including some of the bone Thor’s hammers and glass bead necklaces I made them.

Last but by no means least, there was the small challenge of making an interpretation of a ships head with a dragon or beast on it. What size to make it, how to prop it up, and what to base it on were somewhat of a challenge as there is very little evidence as to what ship heads may have looked like, and a full size one or three dimensional version would be unwieldy and likely too expensive to produce, but it needed to maintain some of its scale and grandeur to impress the children.

As a result, I decided to make it as a flat oak board that would be detachable from the front of the ship as suggested by some sources. For the design I chose to base it on one of the Gokstad ship burial objects carvings, as whilst it wasn’t a ship head, it was from a ship burial from the period, and was carved on a flat plank like this, and also importantly depicts some form of Horse, or Dragon, or other beast (notoriously viking snakes and dragons can have ears like horses which makes interpretation difficult!). Finally, a simple timber stand was constructed to hold the shiphead up higher and at the angle of the front of the ship. 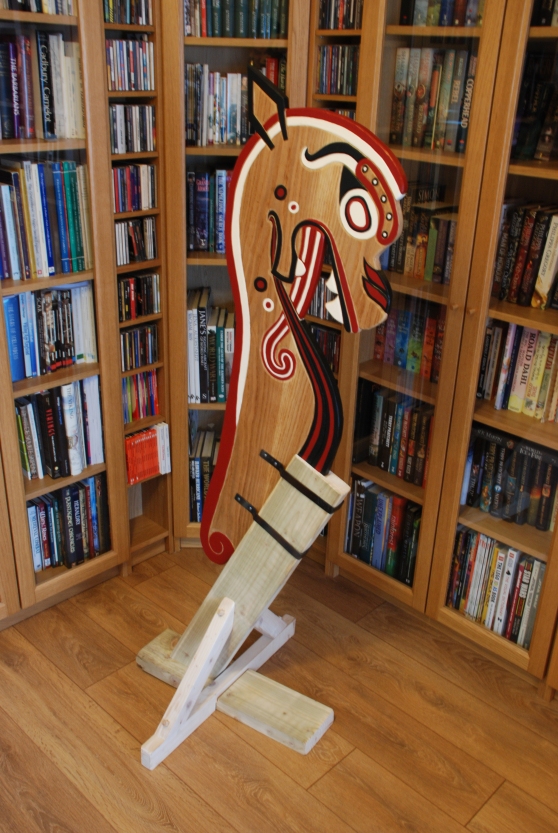 Finally here are a couple of pictures of the objects being used in anger, courtesy of the CSVA!